Tilting at windmills. Because those windmills think they're better than us. 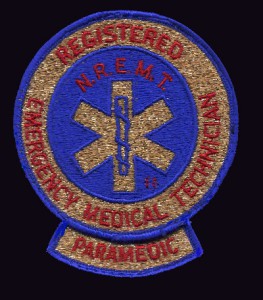 While I was digging through one of my bureau drawers today I saw an old Paramedic shoulder patch. I took it out and looked at it. It was one of the first ones I got when I graduated from Medic school. The one that I never put on a uniform so it wasn’t faded from sun or washing. The one that looked just like the day I got it. The old style shiny disco patch.

The thing is gaudy. A gold circle around a disc of blue with a gold star of life on it, and the gold Paramedic rocker underneath. That doesn’t convey just how tacky it is. The gold isn’t just gold colored thread, it’s shiny, glittering. The blue isn’t a serious navy but a bright royal blue. The lettering is bright red, because why the hell not.

I like the fact that it’s loud and tacky and big. I figure after the hell of sleep deprivation and sweat, blood and tears that was medic school, I want astronauts on the ISS to look down and know he I’m a medic.

But more than that, I love the big gaudy patch because it tells the world that I am the man who practices his trade in dark alleys, heroin syringes and spent brass and broken glass crunching beneath my boots as I labor to save the people nobody else would, as they gasp and gurgle and cough up hepatitis blood and e-coli vomit and tuberculosis sputum. It was big and cocky because it fits the personality of those who wear it.

It means a lot to me. It’s not a medal or a commendation. Those you get for something you’ve done. Recognition. A pat on the back.

The patch isn’t a reward. The patch is a promise. It’s for what you promise you will do. I wore it because I promise I’ll be there, despite the germs and the dark and the danger, and I will be  hope for those without any.

That means a lot, even to a cynical old bastard like me.